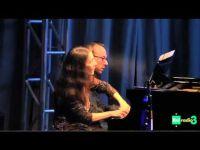 Alessandra Ammara has drawn the attention of the musical world from a young age, succeeding in major international piano competitions such as the “J. Iturbi” in Valencia, the “Casagrande” in Terni, “G. B. Viotti” in Vercelli, and the “Van Cliburn” in Fort Worth. In 2000 she was awarded “Laureate” by the “Esther Honens” international piano competition in Calgary, Canada.

Alessandra collaborates with many great interpreters, including Alban Gerhardt, Leonard Elschenbroich, Roberto Fabbriciani, Anton Kuerti, the Takacs Quartet and the Sine Nomine Quartet. Since 1999 she has toured in piano duo with Roberto Prosseda.

After winning major prizes in several important piano competitions, including the “U. Micheli” in Milan, the “F. Schubert” in Dortmund, the “A.Casagrande” in Terni and the “W.A.Mozart” in Salzburg, he has performed successfully in more than 40 countries in Europe, Asia, Australia, North and South America.