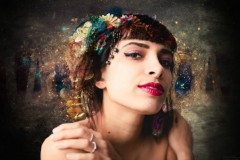 Alysha Brilla
Presented by The Roxy Theatre and The Georgian Bay Folk Society
2014 Juno nominee Alysha Brilla is a critically-acclaimed, Tanzanian-Canadian singer, songwriter and producer. She plays guitar, piano and djembe, creating a unique original soul-folk sound which has been featured on stages internationally. In 2013, Brilla released her first full-length record, In My Head. The music video for her Swahili-infused song Nobody won the 2013 Ibiza Music Video Festival Fan Choice Award. A co-production with the Georgian Bay Folk Society, this is an evening of song like no other.