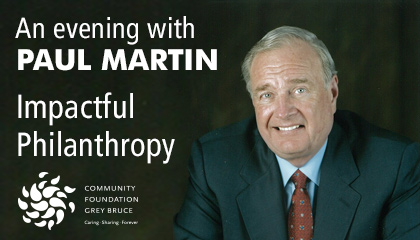 His appearance, on the occasion of the Foundation’s 20th Anniversary, will highlight the need for impactful philanthropy in our community and speak to the vital role played by Community Foundations in supporting charities and not-for-profit organizations.

After leaving politics, former Prime Minister Paul Martin made Aboriginal issues the centre of his life’s work. He founded the Martin Aboriginal Education Initiative focusing on elementary and secondary education for Aboriginal students and the Capital for Aboriginal Prosperity and Entrepreneurship (CAPE) Fund, an investment fund investing in Aboriginal business.

As part of their sesquicentennial project and 20th anniversary goals, the Community Foundation plans to increase their Smart & Caring Education Fund by an additional million dollars before 2017. These funds will provide a much needed increase in bursaries and scholarships available to students in Grey Bruce who are pursuing all four pillars of education: university, college, apprenticeship and workplace programs.

Tickets are $25 per person and $15 for youth with student id.