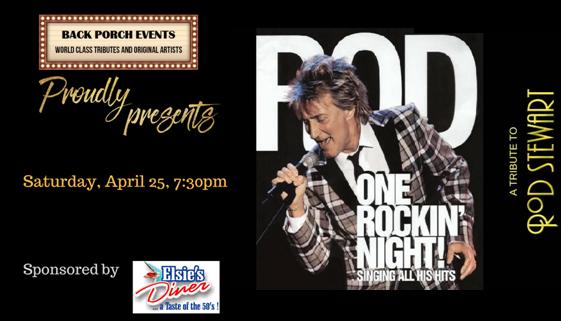 Featuring Doug Varty the world’s #1 Rod Stewart tribute. It takes a special kind of performer to create the voice and stage presence of Rod Stewart, the timeless vocalist known for hits like “Hot Legs,” “Forever Young”, “Maggie May” and “Do Ya Think I’m Sexy.” Doug Varty is that performer. Just like Rod, whenever he performs, Doug makes the stage (and the surrounding area) his playground, interacting with the crowd, dancing with, and singing to audience members. “Does he look like Rod Stewart? You’ll recognize Stewart’s soulful rasp, his trademark outfits and swaggering stage moves when you this tribute to the Legend in concert. With reputedly the best sounding, most natural Rod voice in the world, costume changes and songs from Rod Stewart’s huge catalogue he will have you dancing in the aisles and singing along from the first song. A two hour roller coaster of Rod Stewart’s greatest hits  this show is rapidly becoming one of the most sought after tribute shows in the US and Canada! Only here in Owen Sound for “ ONE NIGHT ONLY”