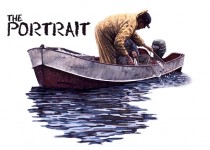 The Portrait, written by Allen Smutylo, is an original play with music that takes place in Tobermory during the early 1970s as the community is in the middle of a difficult transition from commercial fishing village to seasonal tourist town.

Part personal memoir and part historical, The Portrait tells the story of Orrie (O.C.) Vail’s struggle to save his waterfront home and workshop from demolition after the federal government announces its plans to build the existing ferry terminal. At the same that Tobermory has become deeply divided, Allen Smutylo and five friends from art college move to the remote village to start an Artist’s Co-Op, Cirle Arts. Allen then convinces Orrie, an imposing fisherman widely known for his hand-crafted knives, to let him paint his portrait and later becomes deeply involved in the fight to save Orrie’s home.

The Portrait is Mr. Smutylo’s first play, although the story was first told in his book, The Memory of Water, which was nominated for the Governor General’s Literary Award in Non-Fiction.

This April, Owen Sound Little Theatre tells this story with its production of The Portrait, featuring a live band on stage with musicians Jayden Grahlman and Will Henry and vocalists Sandy Lemairtre, Michelle Legere and Becky Johnson-Morelli.

On Wednesday, April 15, OSLT and The Thomson Art Gallery are hosting a fundraiser Gala Preview Presentation of the Portrait. Be the first to see this production and to see Mr. Smutylo’s art exhibit, A Survey of Portraiture, in the Roxy’s gallery.  Tickets $50, with a $25 tax receipt.