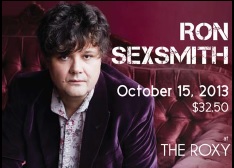 “The song is my saviour. I’ve got to raise it up, as far as my spirit can reach, that everyone might see.” – Ron Sexsmith, from Late Bloomer.
It’s been a decade since Canadian icon Ron Sexsmith last graced Owen Sound with his masterful repertoire.

Juno winner Ron Sexsmith has headlined both the world famous Royal Albert Hall and Toronto’s Massey Hall, and has won acclaim from legends like Paul McCartney, Elvis Costello, and Elton John. With 13 albums under his belt, Sexsmith has proven himself to be a storyteller and musician worthy of the praise he has received. Opening the show is East Coast darling Jenn Grant.
Don’t miss your opportunity to see a couple of Canada’s best – it will be a big show!
www.ronsexmith.com
www.jenngrant.com