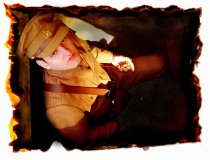 A theatre production honouring the Dumbells, Canada’s original sketch comedy group, and the centenary of WWI. Juno-nominated musician Jason Wilson wrote The Soldiers of Song as a tribute to the wild and wacky wartime comedy troupe that was the forerunner of modern satire and the first Canadian group to produce a Broadway hit. The original Dumbells performed at the Savoy Theatre in Owen Sound.
Special rates for Veterans and Service Members.