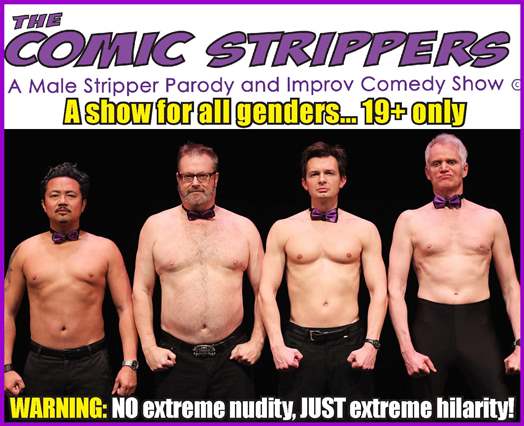 Back By Popular Demand With An All New Show!

The Comic Strippers, back by popular demand with an all new show, are a fictitious male stripper troupe played  by a cast of some of Canada’s best improvisational comedians. These guys try to be sexy… it just comes out funny. Constantly grooving and gyrating, in between scenes they banter with the crowd and perform their sexylarious twist on improv sketches. They sing, they “dance;” these guys are oiled up and ready to make you laugh. Women often say the most attractive thing about a man is his sense of humour – so ladies, these stripped-down comedians are sure to make your head explode. And not to worry, gentlemen, this is definitely a parody of male strippers. Some of the performers have what’s called ‘Comedy Bodies’ – they will make you look fabulous by comparison!

Fresh from sold out shows in Vegas, Australia and Canada and Canadian Comedy Award Winners for Best Live Production, The Comic Strippers are:

Pearce Visser – Pearce is a 25 year veteran of improv, performing and teaching across Canada and the globe, is in the Cirque du Soleil talent roster, and can be seen occasionally on film and tv.

★★★★★ “Extremely funny comedy show that showcases their mercurial improvisational talents.” – UK Fringe   Review
★★★★ “A high- energy evening that never loses pace.” – Adelaide Now
“A show suitable for both men and women… an entertaining ride where anything goes.” – Rip It Up Magazine
“One of the most hilarious shows I’ve ever seen.” – Vancouver Sun